Nobody expected the success of the first Saints row but a sequel was on everybody’s minds when it came out and we wouldn’t have to wait too long for it to come out. Just two years after the first one released, we were treated with the follow-up of the century, Saints Row 2.

This game took everything that was great about the first one and improved it tenfold with an expanded map, more engaging story, and megaton of content to chew through as you cause mayhem on the streets of Stilwater. But is it still as good as it was back then?

It’s no secret that the series has deviated far from its gangsta roots with the most recent entries but does that mean the old school trend was bad? Certainly not. In fact, it’s the style that catapulted this franchise into the mainstream, and it’s easy to see why from the moment you first get onto the main menu.

The vibe is unmistakable and it’s there all the way through until the credits roll all for you to enjoy at any pace you want. Wanna lead an army of ninjas with machine guns? You can do that! It’s all up to your imagination. So, without further ado, let’s see why Saints Row 2 is still good in 2021.

Following directly on from where the first game left off, Saints Row 2 begins with you waking up in a prison hospital after several years in a coma. Being horribly burned and disfigured in the blast, your character underwent some intense plastic surgery, giving you the perfect excuse to create your character any way you see fit.

Just like last time, Saints Row 2 features an extensive customization system filled with way more options than ever before, enough to make a game like the Sims 4 jealous. You can finally choose a voice for the protagonist as well as personality traits and fighting style to truly define your style and, most importantly, you have the option of being a female character too.

Like the last game, you can always make any changes later by going to the plastic surgeon, Image As Designed, but once you’ve got your character ready, it’s time to break out of Prison and regain your place as the Gangster King of Stilwater but a lot has changed since you’ve been away.

The 3rd Street Saints are no more. All the homies are missing, dead, or in jail and 3 new gangs have swept in and taken over Stilwater. Not to mention the complete gentrification of Saints Row by the infamous Ultor company (yeah, the clothing company), completely removing the Saints Legacy.

Each gang is split into 3 main storylines that can be accessed at any time with the last few missions only being available once you’ve completely taken over Stilwater. And, anyone that’s played the first game and wants revenge on the people that betrayed can access the revenge missions by going to Police Chief Troy’s office.

Outside of the regular missions, there are several activities to do around the city that fill up your Respect bar, and you’re going to have to do that to unlock more missions. Luckily, there are some of the best activities making their return and some new ones to get stuck into. 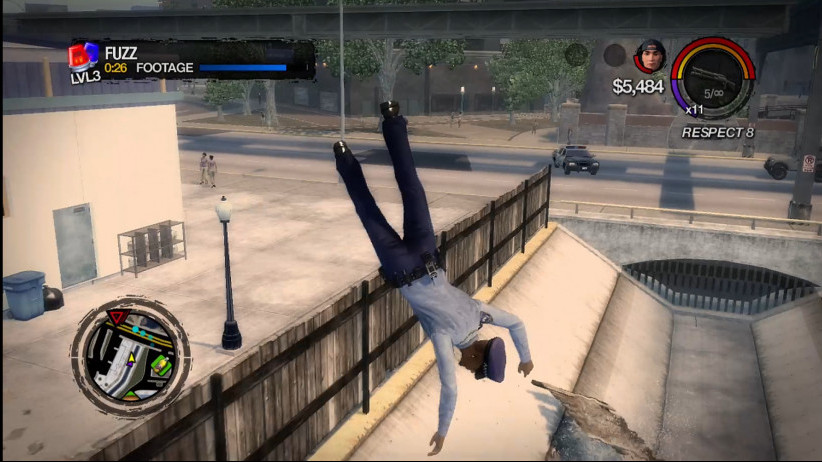 Fight Club: Take on multiple opponents in a cage fight with nothing more than your fists and the various objects that get thrown into the ring.

FUZZ: Play the starring role in your very own version of COPS by taking down marked targets in a variety of ways…I mean, arrest criminals.

Heli Assault: Escort your homies on the ground as they drive around the city making deals using an attack helicopter and its many rockets.

Septic Avenger: destroy property value using a mobile septic tank, a roof-mounted spray weapon, and all the contents inside the tank.

Trail Blazing: Race through checkpoints on a Toad (quad bike) while covered in flames from head to toe while causing as much damage and destruction as possible.

Drug Trafficking: Ride shotguns with a dealer and protect them as they drive around making deals using the weapons provided.

Chop Shop: Deliver a list of vehicles to the chop shops located around the city.

Demolition Derby: Destroy other vehicles with your own vehicle in an arena.

Hitman: Kill targets on a list by following the instructions to get them to appear.

Insurance Fraud: Earn money based on how much damage you take from collisions with cars and falling.

Racing: Different races are located around the city and include motorcycle races, car races, and plane races.

The name of the game this time around is Mayhem with many of the activities centered around causing as much pandemonium as possible in things like Septic Avenger, Mayhem, and even FUZZ which brought some of the most entertaining moments on my playthrough.

And that’s all before you get the actual story missions themselves. The story is even more over the top but surprises by delivering an intense and engaging narrative to compliment the chaotic gameplay and it can all be experienced at your own pace, there’s really no rush.

The ability to ADS was sorely missed in the first game and it’s the best addition to the gunplay. Being able to dual wield pistols and SMGs was a welcome improvement as well and I found myself using 2 SKR-9’s for the majority of the game since it was the most fun and effective way to dispatch targets for me.

It’s hard to think I went the entire first game not using a motorcycle (because there were none) but I used them almost exclusively in Saints Row 2. That’s just some of the many new vehicles including boats, planes, and helicopters which open up the city in all-new ways.

And, you’re going to need all those different ways since the city is much larger than it was before. There are obvious expansions to the map but the streets are much wider and a lot more fun to drive around in with each area of the city feeling unique and distinct. The open-world truly feels alive. 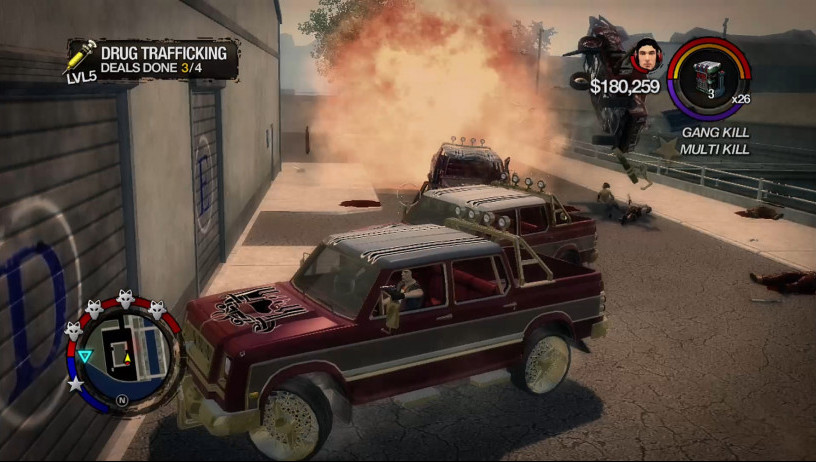 Despite all the new things that they added in the game, they removed a lot of the finer details that I enjoyed in the first game and it can be a bit of a letdown when you’re expecting certain features to be there when they’re not. Even if I’m mostly just nitpicking.

The booze and drugs from the first game might have seemed like a gimmick but I made good use of the stat bonuses that they gave and enjoyed ripping a bong in the middle of a gunfight so that I could take less damage and have some serious fun. It almost negates the need for the Liquor stores in the first place when they’re just nick-nacks.

And come on, only being able to pierce my ears kinda sucks when I had multiple piercings on my character in the first game. As I said, these are minor grievances that honestly didn’t bring down my experience but annoyed me the second I noticed these features weren’t carried over.

Absolutely! The open-world genre is far from saturated and Saints Row has carved out a unique space for itself and with Saints Row 2, they redefined the movement of crime-oriented adventure and, with 6 games in the franchise, it’s easy to see why the community continues to grow each year.

Have you played Saints Row 2? What did you think of the second game in the series? Let me know in the comments section below.