Call of Duty: Mobile seems to grow more and more popular by the day and, now more than ever, you need to be on your game if you wanna climb to the top and join other players like me in Legendary Rank. It’s no easy feat but can be achieved with a little bit of practice.

But what exactly should you be working on when you do the practice. The game itself is made up of different fundamentals, from the unparalleled skill you need with a gun to the slick moves you need to maneuver around the map with grace, like a bullet-bombing ballerina.

We’ve spoken before about some beginner tips & tricks and I highly recommend you check that out if you’re new here but, for those of you that have been playing for a while and need more things to improve on, I’ve got just what you need. Here are some more advanced tips & tricks for Call of Duty: Mobile.

People often debate whether or not the speed of your connection matters since many players have reached Legendary Rank while still playing with a ping above 100ms. Let me be the first to confirm for you that it does matter but that doesn’t mean you can’t succeed while living far away from the servers.

That doesn’t mean you shouldn’t try to get the best connection possible, however. You simply need to recognize how this affects your game and how your playstyle should counter the obvious disadvantage. Knowing your opponent is going to be able to react faster than you means you need to be tactical whenever possible.

Being able to set up traps, using fluid movements so that you’re not a sitting target and using any advantage on the map to make sure you see the enemy before they see you will ensure that you can counter the delay and even out the playing field.

In-game modes, like Hardpoint and Domination, respawn locations aren’t as obvious as they are in Search & Destroy since the gameplay is relatively fluid and your original location might not be as safe the second time around. As a result, targets will constantly be popping back up in different locations and it’s a perfect way to capitalize.

It only requires good knowledge of the most common locations that dead players respawn from and a keen awareness of where your team is and how many of the enemies are dead.

You’ll be able to predict where they are going to be, without the use of a UAV, and cut off any paths they may use to return t the action. Not only will you always be prepared but catching your enemy off guard is a surefire way to secure some easy kills for you and your team. 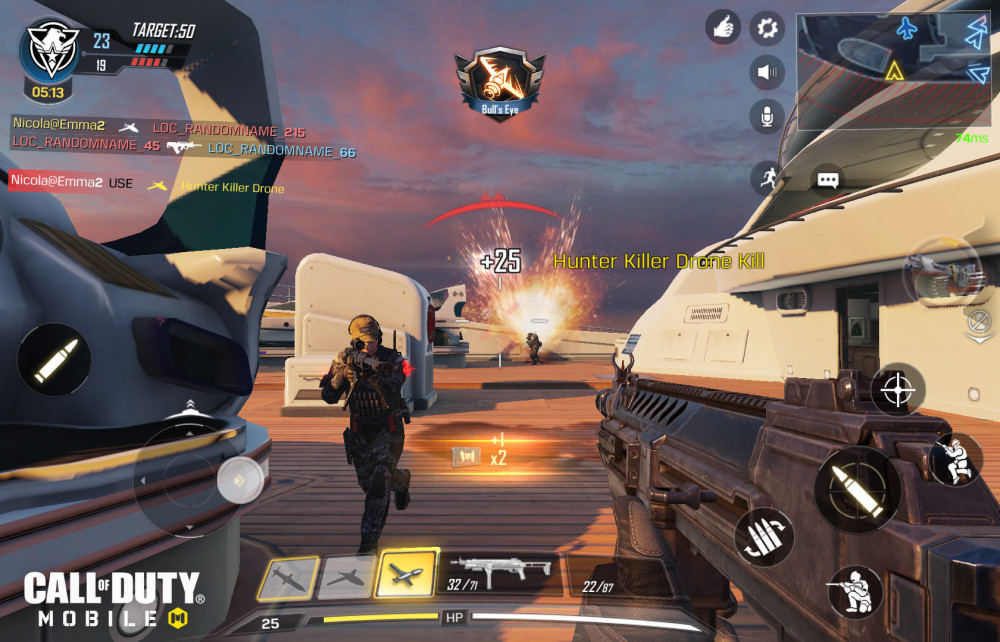 There’s no doubt that scorestreaks are a vital part of any victory within Call of Duty: Mobile but there is one scorestreak, in particular, you must take into every game and that is the UAV. Don’t get me wrong, VTOL’s and Sentry Guns are pretty great tools to have at your disposal but the UAV gives you the ultimate advantage in any game.

Can you imagine how much easier it would be to attack if you already knew where the enemy was? Instead of running straight into the hostile zone and hoping to spot your target first, you’ll know exactly where you need to point your gun before you even turn the corner.

Use it first and use it fast before you think about launching that predator missile. It will not only help you but your teammates as well and be a complete gamechanger when you’re in a tough fight and need to get back into the game.

Now, this was something I’ve seen pro players and YouTubers do in their games but I always thought it was a fancy gimmick they used to make their plays more exciting. Turns out it is an effective and sometimes lifesaving trick that you should be practicing at every opportunity.

You may even need to re-adjust your button layout or use a hybrid gaming controller to be able to pull it off but all you have to do is press the jump button almost immediately after you start sliding and your soldier will immediately spring up into the air from the slide.

We all know that moving targets are harder to hit, so I’ll often use this as an escape when I’m caught out of position in Battle Royale and it’s a great way to rush through an opening or doorway and take out anybody that may be camping around the corner.

Another trick that I’ve seen used often but is a lot harder to pull off since you will need to expertly choose the right moment to use it but it can turn the tide of any 1v1 situation. A Drop-Shot simply means immediately going prone as soon as you start firing your weapon. So you essentially “drop” to the floor as soon as you take your…shot.

Much like the Jump-Slide, it can completely throw your opponent off guard and cause them to miss a lot more than they should. If you’re positioning is right, you will barely need to aim as well and the recoil should be kept to a minimum in this position as well.

Just make sure you don’t use it when you’re outnumbered. You might be able to take out one guy but going prone leaves you unable to move and thus makes you an easy target for the rest of the enemy team.

Remember that, in the end, no one becomes an unstoppable killing machine overnight and it takes time and a lot of practice to be an expert in Call of Duty: Mobile. I can’t promise you’ll be the next Ferg but you’ll stand a better chance with these tips.

Are there any tips you would like to share? What are some of the things you learned as you climbed to Legendary Rank? Let me know in the comments section below!