Season 7 of Call of Duty: Mobile is well underway and it has brought a heap of new content for players to enjoy and explore. Activision made a lot of changes for the better in this patch and it’s been a great first week, to say the least. I’ve already surpassed my previous best and ranked up all the way to Master Tier in Battle Royale.

From the completely new zones on the expanded Battle Royale map to the brand new soldier skins that are available to earn and collect, this season delivered on all its promises and there’s a lot more still to come in the next few weeks.

There’s so much new content to dive into that I’m sure to be discovering new things as the weeks go by, so today I thought we’d take a look at some of the best highlights so far and what I’ve enjoyed about the most about Call of Duty: Mobile Season 7 – Radioactive Agent 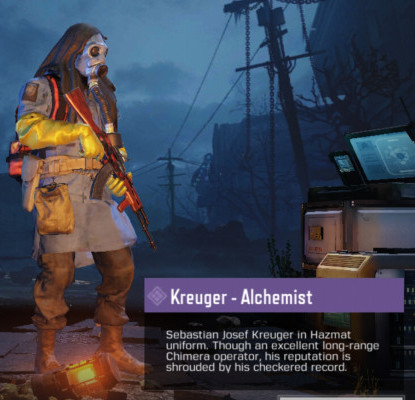 This is, by far, my favorite new skin from the Battle Pass rewards and the one I use most often. I think the overall aesthetic is great and Kreuger’s gas mask is the better looking one in the new theme.

Plus, the overall color palette of his suit is vibrant yet still serious, and it’s been on the most sought after Kreuger
skins for a very long time since it debuted in a trailer for the new Modern Warfare remake not so long ago. So, as Call of Duty: Mobile players, I think it’s great we get to have this skin as well.

His character model is also a little bigger and taller than most of the other soldiers, making his presence on the battlefield all the more menacing and adding to the unique quality of this skin. It certainly makes the Battle Pass worth buying this season and I highly recommend it even if it’s just to get your hands on this skin. 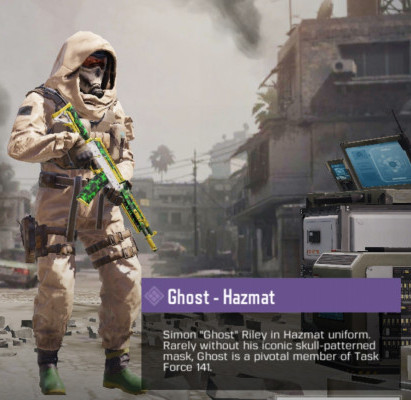 Simon “Ghost” Riley is no stranger to Call of Duty: Mobile and is a familiar character throughout the franchise as well since his arrival in Modern Warfare 2 on the console. I mean, he’s even the first character you see in the tutorial when you play.

This season, Ghost has moved on from the Wild Wild West uniform of Season 6 and gone full Radioactive Agent with a hazmat suit of his own. I think they made great use of his trademark skull pattern mask by combining it with a cool looking gas mask that fits with his “covert ops” aesthetic quite well.

I’m not such a big fan of the color palette though as I think the tan color works better in a desert environment and, as a result, it’s only the mask that fits the new theme to me. Especially when a lot of the new weapon and vehicle skins properly emphasize the toxic vibe of a radioactive battleground. 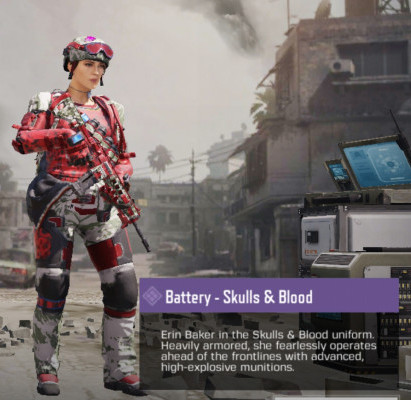 Now, don’t get me wrong, this is definitely a cool skin and worth the grind up to Master III in ranked Battle Royale. The Skull & Blood pattern has a great aesthetic and it looks even better when you combine it with the other Skull & Blood items you will acquire along the way.

Buuuut! When I compare it to Battery skins and the way the character looks in other games, I’m just left feeling kind of…underwhelmed. It’s a great skin to have in your collection but I honestly don’t see myself using it much in the future, especially when I have Seraph – Desparada in my collection too.

The last patch updated her VO as well, making her a much better choice overall.

As I’m sure most of you know by now, Battle Royale is my favorite game mode in Call of Duty: Mobile and this season has brought a bunch of new content to the arena. There’s a mile-long list of all the new features and secrets but these are just a few of my favorite new additions.

Spamming your emotes after killing an enemy might just be a Fortnite thing but now there’s a real reason to own your very own dancing emotes in Call of Duty: Mobile. Just head right over to the biggest building in the Downtown Zone and you’ll see a massive dancefloor for you to show off your sweet sweet dance moves.

“But what about the music?” you may ask. Indeed, no dancefloor is complete without a DJ booth and there’s one waiting for you. Just look towards the main stage and you’ll see all the equipment you need
to start blasting some tunes.

Be warned, however, as the music is extremely loud and can be heard by anyone approaching the area, so they’ll definitely know you’re there. On top of that, it makes hearing footsteps while you’re outside nearly impossible, so it may not make a lot of tactical sense to turn up and get lit mid-game. It sure is a lot of fun though!

After all the hype surrounding the arrival of tanks into Battle Royale, we finally have these monstrous vehicles to use in the game. As you can imagine, this has almost completely changed the dynamic of the late game and can completely turn the game around if you get your hands on it.

Playing against the tank forces you to think hard about your movements and your plan of attack, especially when the enemy manages to get the tank all the way into the final circle and the space becomes smaller and smaller.

However, don’t get too confident if you manage to get your hands on the tank either. While it may be tough to bring down, you will get taken out if you sustain enough damage, and the gunner on top is permanently exposed to gunfire as well. So it definitely has its weaknesses.

So far? Yes! I was also slightly disappointed by the delay but I honestly can’t be mad at Activision for choosing to stand behind a noble cause. Remember, this is only my opinion, but I’m enjoying all the new content I’ve unlocked so far and can’t wait to see what the rest of the Season has to offer as I make my way up the ladder.

What have you enjoyed so far about Season 7? Do you use any of the new soldier skins? Let me know in the comments section below