Call of Duty: Mobile is the gift that keeps on giving and, in season 12, they’ve taken it to a whole other level with the brand new special event that we have to participate in this season. It’s time to choose your side and start battling it out for all the juicy rewards in this season’s event, Knights Divided.

Similar to events that we’ve seen in Season 10 (THE HUNT) and even Season 9 (CONQUEST), players will have to participate to win various rewards throughout the event, meaning every player has the chance to cash in and make the most of this game mode and all it has to offer.

But which side should you go with and how easy is it to start earning those valuable points? It can be confusing for some of the most experienced players out there. So, without further ado, let’s take a look at this season’s brand new event as we start kicking some serious but in KNIGHTS DIVIDED.

How Does It All Work?

The Knights Divided event splits the player base between two different but equal factions and it’s up to everybody to decide which team they will champion for this event. Will you be on the deadly Red Team or will you support the underdog Blue Team? Let’s make that choice as we break down how it all works.

All the rewards that are available throughout the event may seem a bit uninteresting on their own but when you combine them all into the same outfit, the entire set looks great and that alone has got me grinding it out to get my hands on these prizes. From new weapon camos and charms to a new soldier as well, you’d be a fool to miss it.

It doesn’t matter which side you pick, everybody has the same weapons and items to unlock with their contribution points. The only difference is that your rewards will be a reflection of the faction you chose to represent. You’ll be getting your weapons and items in the Red Curtain camo for Red Team and the Ultramarine camo for the Blue Team. 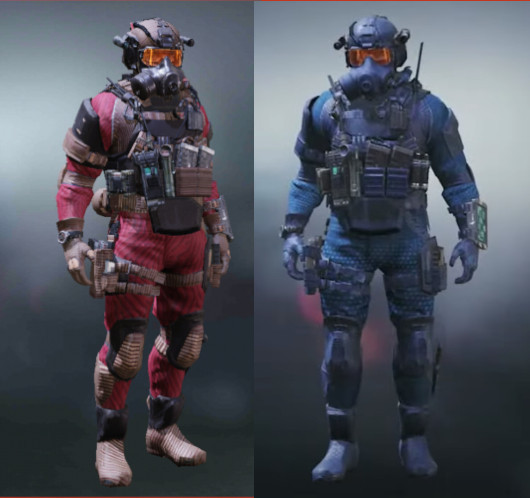 PMC might be well known in the Call of Duty franchise as the acronym Private Military Company but the Elite’s barely featured throughout the game’s history. That all changed with the release of Call of Duty: Mobile as the Elite PMC became a playable character for the first time.

We’ve seen many different variations of him throughout the game’s lifetime, however, but that doesn’t mean I’m opposed to adding another one of these great soldier skins to my collection. It’s a character that I can see myself using over and over again in Multiplayer as well and not just Battle Royale.

We’ve had way too many flashy, bright, and colorful skins over the past few weeks so these new variations are a welcome change of pace. I’m not ashamed o say that this soldier aesthetic was ultimately what made me choose the Red Team for my playthrough of the Knights Divided event.

So, Which Side Are You On?

As you can see, there is a lot to be gained from not only participating in the event but doing the most to earn as many contribution points as possible. The requirements change every day, so there’ll be a fresh new way to earn those sweet sweet points every time you log in.

I chose the Red Team this time around and I’m well on my way to getting that new Elite PMC so that I can use him in my favorite mode, Battle Royale. The wavy design looks great and, when combined with all the other rewards, it becomes a set that I’m dying to show off.

Even if you haven’t logged in to sign up yet, there’s still plenty of time for you to choose a side and get busy winning those territories for your team. There are 1 left to be precise and it looks like Red Team is going to bring home the Epic prize waiting for everybody at the end.

Are you taking part in the Knights Divided event this season? Which faction did you choose to earn points for? Let me know in the comments section below.